I’m a voracious reader, but I so rarely read a book twice. Except for Barbara Kingsolver‘s books. For me, her books are a circle. I finish one and I turn back to the beginning to start again. I’ve read nearly all of them twice, even the essay compilations. I’ve read my favorite, Poisonwood Bible, three times and will no doubt read it again.

I recently finished reading two books of her essay compilations, High Tide in Tucson and Small Wonders. I’ve so rarely read books of essays that a teacher didn’t assign. Yet these are so charming and wise. They made me think, they made me reread sentences two and three times and, of course, they made me want to turn back to the beginning to start over. Throughout both books (written in the 90s and then early 2000s, whenever Kingsolver wrote about the state of our society–with all of its troubles and all of its potential–I would wonder what must she think now?!

And then she released her latest novel, Unsheltered. I was so excited, I actually got myself over to Barnes & Noble on its release date instead of lazily preordering it off of Amazon. It was at the checkout that the cashier notified me that I was 13th. Apparently the author was coming to speak, and I was in line for the book signing. Bonus! 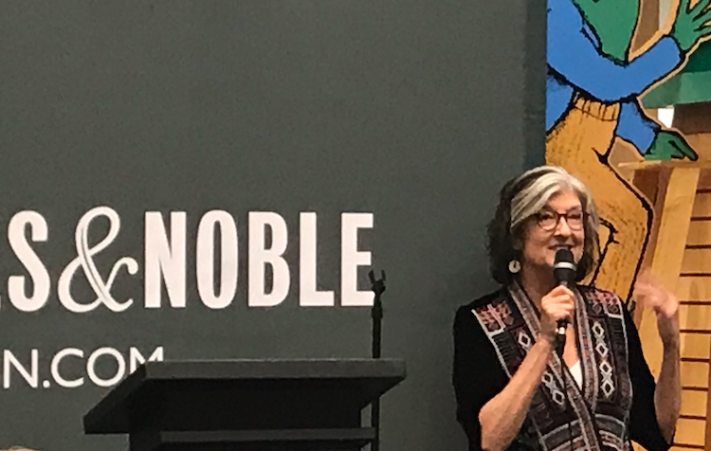 I never dreamt of meeting the author whose thoughts I’ve come to know so well. Now that I have, I can’t believe I never did. I brought my second daughter, who’s already begun her journey of reading Kingsolver. Together, we were charmed by her reading of the book passages and her wit. Just as her books inspire her readers to be better by portraying American characters who are trying to do just that, her book talk was the same. God knows we need more of that these days.

After the talk, we headed to the signing table, and I gave her a thank you note. When someone gives you so much, it’s only fitting to say thank you. But, I think the bigger gift to all of us was having my daughter there. She was the only teen, and most of the more than 100 people there were older than me. At the Q&A, a woman asked how do we foster the next generation of writers? Kingsolver answered, “Foster present readers.” At that, my daughter raised both hands in the air.

And at the signing table, I told Kingsolver that I’m fostering a future writer.

Read this post on how we “foster present readers” in our family by checking out 50 new library books each week. I wrote the post in 2012, literary hundreds of library visits ago, and I continue to go every week (the little girls pictured in the post are both Barbara Kingsolver fans). We now have four voracious readers, and I have no doubt it’s thanks to library books. One point I would add to that blog post is: to parents who say, “I can’t get my kids to read,” I say read novels to them that you BOTH enjoy. Harry Potter did the trick for all four of mine. Peter and the Starcatchers series also worked.

One thought on “On book talks and fostering future writers”