All you need to resist the Shaloch Manot

If every time you (or your kids!) open the pantry, loads of treats stare out at you, this week’s New York Times Magazine cover story, The Extraordinary Science of Addictive Junk Food, came just in time. In case you’re not the type to read a long feature (though, it’s well worth it), I’ll tell you the gist of it. And then, of course, I’ll offer an idea to combat that junk.

“Today, one in three adults is considered clinically obese, along with one in five kids, and 24 million Americans are afflicted by type 2 diabetes, often caused by poor diet, with another 79 million people having pre-diabetes.” Those are stark numbers. And they’re even higher in the Orthodox community, according to a Mt. Sinai Hospital survey.

These numbers are not just a matter of our lack of self control. Rather, there’s a conscious effort — taking place in labs and marketing meetings and grocery-store aisles — to get people hooked on foods that are convenient and inexpensive. The amount of salt, sugar, oil in products; the way that the food crunches or dissolves; it’s color and packaging are all scientifically designed to push our evolutionary buttons so that we can’t stop eating. About the Cheetos, for example, one food scientist said, “If something melts down quickly, your brain thinks that there’s no calories in it . . . you can just keep eating it forever.” 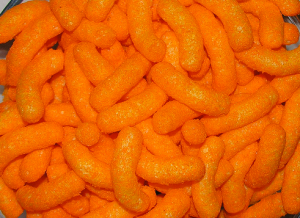 And then there are foods that we think are healthy–like yogurt and pasta sauce–that contain more sugar than Lucky Charms (pretty much the most sugary cereal one could imagine).

So, if you’re going to try dropping some processed foods from the family diet, why not start with breakfast? Try buying large containers of plain oats and 1/2 gallons of plain yogurt, instead of the sugary pre-packaged alternatives. If you like yours sweet, add a little bit of honey or real maple syrup yourself and some fresh fruit. The result will taste even better, and you’ll save money too!

One thought on “All you need to resist the Shaloch Manot”