Remember Madlibs? Those books were my favorite as a camper.

Let’s try this one about my Sunday. You fill in the blanks with the activities that took up your Sunday because I know it wasn’t any easier. But do me a favor–leave out the inappropriate answers. This is granolaDOX, people.

Now I know why they’re called Madlibs. Somebody stop the madness!

I woke up yesterday with a hangover from all the busy-ness. I gotta cut back.

So here’s my plan for this week. I’m cutting back on cooking. Only, we’re still going to eat totally awesome, fresh food. And I’m not talking take-out here.

Today I took a page out of Tamar Adler’s book, An Everlasting Meal: Cooking with Economy and Grace. You’re going to be hearing a lot about this book, my friends, because I’m only half-way through, and I’ve already learned something new on nearly EVERY page. This woman can cook–as in cooking with Alice Waters at Chez Panisse AND she can write–as in editor of Harper’s Magazine. That makes her book perfect, as far as I’m concerned.

1. On Monday, I roasted a whole slew of vegetables with drizzled olive oil, sea salt and cracked pepper at 400 degrees. I used potatoes, butternut squash, carrots, red onion, garlic and cauliflower because that’s what I had. I also cooked two cups of rice, sauteed swiss chard with onion, garlic and olive oil and simmered a bunch of dried black beans. This all took about 30 minutes with my Granola Baby helper. 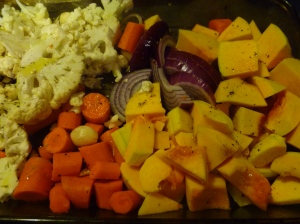 2. For Tuesday-Thursday, I’m using all the already prepared foods to jump start my dinners. The possibilities are endless, with enough simple, fresh meal ideas from Tamar to make my head spin. On Monday, I ended up serving warmed bread, topped with the cauliflower, greens and onion, which I mixed with scrambled egg and feta cheese. Yum.

The rest of our week’s meals are TBD, but I’ve already got a major jump start on them. I’m thinking burritos (I already have the rice and beans prepared) and black bean soup made from the rest of the beans. Stir fry is a given, and I’ll probably toss warmed veggies over a bed of salad greens. I’ve got tons of roasted veggies for sides, or I can throw any combination of them in a pot with a sauteed onion to make soup. All it takes is a freshly sauteed onion and some fresh herbs to make everything taste new.

I’ll still have to do some preparing, but with my prep work done, I’m hoping for a little more breathing space.